Wire Stories > KAFN  > Federal and Provincial Governm...   > You Are Here

(Alert Bay, January 11, 2011)  Representatives of the Attorneys General of Canada and British Columbia have filed Appeals to overturn a decision by the Honourable Mr. Justice Slade of the Supreme Court of British Columbia. Mr. Justice Slade's December 1, 2010, 87 page decision supported the Kwicksutaineuk/Ah-Kwa-Mish First Nation's (KAFN) application for Certification of their class-action related to the interference with Aboriginal fishing rights allegedly caused by open net-cage salmon farming in their Territories (the Broughton Archipelago).

Bob Chamberlin, representative plaintiff and KAFN Chief, expressed deep frustration and disappointment with the actions of both governments. "The class-action lawsuit seeks to answer  questions First Nations in the Broughton Archipelago have known the answers to for some time, but governments have failed to listen. We have turned to the courts to ask for a fair determination as to the extent that open net-pen salmon aquaculture has impacted wild salmon stocks in the Broughton Archipelago; and whether the Province's authorization and regulation of salmon aquaculture has caused the impact."

Chamberlin observed that "With certification of the class-action, we hoped that a long history of government delay, denial and distraction to avoid these questions would come to an end. I am saddened, but not surprised at all to learn that the Federal and Provincial governments have chosen the path of more legal bills and delays over a sustainable fishery, fairness and progress on this important issue.  These attempts to overturn Justice Slade’s carefully reasoned decision are bad for the wild salmon, bad for First Nations and bad for the citizens of British Columbia."

Chamberlin wondered, "Why is the Federal Government seeking to derail the KAFN class-action less than two months after Prime Minister Harper endorsed the United Nations Declaration on the Rights of Indigenous People?"  He noted that a statement had been recently released by the Federal Government with the following language: "The Government's vision is a future in which Aboriginal families and communities are healthy, safe, self-sufficient and prosperous within a Canada where people make their own decisions, manage their own affairs and make strong contributions to the country as a whole."

"With the rapid decline of Broughton wild salmon populations, speed is crucial to the KAFN. We were forced to the Courts. Consciously, and I believe responsibly, we choose the class-action route as it had the best potential for quick and cost effective progress through the judicial system," stated Chief Chamberlin. He further commented, "The KAFN is fully committed to having our First Nation Aboriginal Title and Rights accommodated through ongoing interactions with the Federal Department of Fisheries and Oceans. We embrace Justice Slade’s decision as a map for finding solutions. More road blocks by government are not helpful; their actions add nothing but months of delay and considerable costs."

He went on to say, "Today, when juvenile pink and chum salmon in our Territories attempt to migrate out to the ocean, they face a gauntlet of open net-cage salmon farms, densely stocked with Atlantic salmon, which are breeding grounds for parasitic sea lice and disease. This is unacceptable. The health of our wild salmon populations is fundamental to our way of life and is a keystone of our cultural practices."

Chamberlin concluded, "We will fully respond to the Appeal to protect our rights. The KAFN remains committed to advance, at every opportunity, our vision of appropriate License Conditions and Area–Based Management that will address the ongoing daily infringements the current licensing regime represents.  We are open to doing the right thing and will work with the Federal and Provincial governments to resolve the fisheries crisis and the class-action, before time runs out for the salmon in our Territories."

To view the original KAFN Statement of Claim filed in February 2009, go to:
http://huffstrategy.com/MediaManager/Media/Text/1233780246_Microsoft+Word+-+0052+Pleading+Statement+of+Claim+Chamberlin_2.pdf 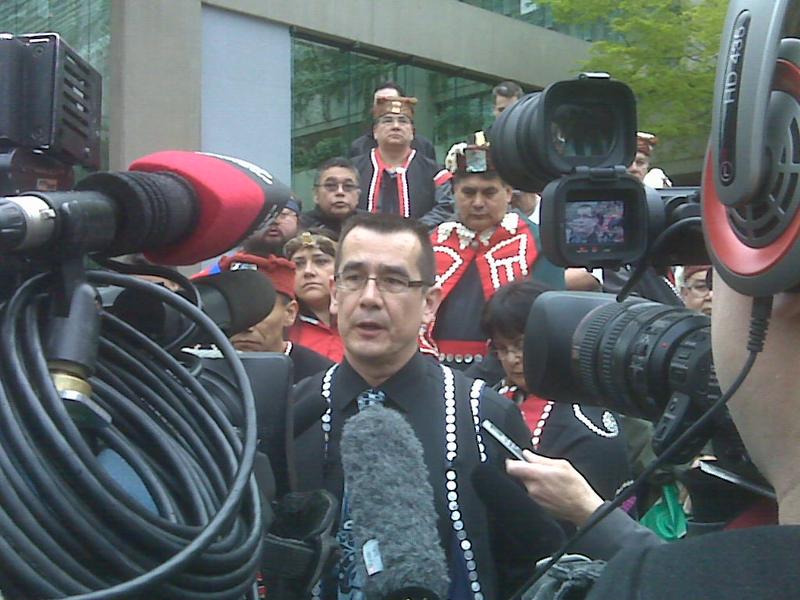