Wire Stories > Friends of the Earth Canada  > Protect native bees by plantin...   > You Are Here

Toronto, ON (June 23, 2020) In recognition of National Pollinator Week, Friends of the Earth is publishing "A Flower Patch for the Rusty-patched Bumblebee: Creating Habitat Gardens for Native Pollinators in the Greater Toronto Area". Friends of the Earth Canada is making free digital copies of the e-guide available through foecanada.org as a public service. 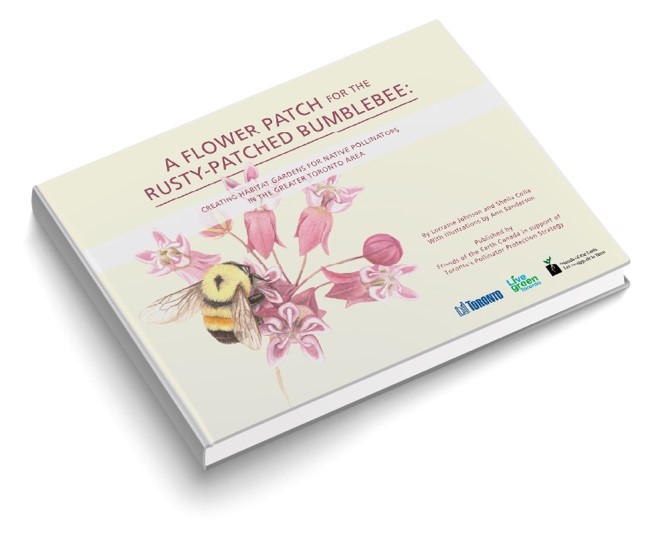 In 2012, the rusty-patched bumblebee had the unfortunate distinction of being the first native bee in Canada to be federally designated as endangered.

"Responding to COVID-19 meant Toronto had to put important projects on hold - this e-guide would have been a casualty of COVID 19 if we hadn't stepped in to publish it," says Beatrice Olivastri, CEO, Friends of the Earth.  "Based on our long running campaign, the Bee Cause, we knew Canadians care deeply about protecting bees. "A Flower Patch for the Rusty-patched Bumblebee" takes that caring to the next level with practical advice on what native plants to use in creating important habitat for native bees."

The e-guide is a result of the collaborative efforts by Friends of the Earth Canada with authors, Toronto-based gardening expert and activist Lorraine Johnson, York University bee scientist Sheila Colla, science illustrator Ann Sanderson who lives in Toronto, and Patricia Landry at the City of Toronto - Parks, Forestry & Recreation Division.

The Toronto area is home to over 350 different species of bees and 112 plus species of butterflies, each of them valuable pollinators. All are under increasing stress due to habitat loss, invasive species, diseases, pesticides and climate change.  The Rusty-patch Bumblebee is a telling case study. What was once the fourth most abundant bumble bee in Southern Ontario in the 1970s was designated Canada's first endangered bee in 2012 with no sighting since 2009.

According to York University Professor Sheila Colla, "Conserving our native bee biodiversity is critical to increase resilience and food security, especially under climate change. The rapid decline of the Rusty-patched bumblebee is incredibly worrisome. We hope this e-guide will help people create habitat that can support the Rusty-patched bumblebee as well as other species at risk of extinction."

Lorraine Johnson explains the e-guide's focus on creating habitat. "These habitat gardens are not only great for bees, butterflies and other pollinators, but they can also be beautiful spaces where we nurture a meaningful relationship with the earth. One of the most positive steps that you can take to support pollinators is to plant native species-in yards, on balconies, in community gardens, at community centres…all over!"

"While Toronto is in one of the most biodiverse regions in Canada.  Our watersheds, ravines and natural areas are treasured, sacred places that require protection as does their wildlife. Climate change, habitat loss and other stressors have led to a drastic decline in many of our native pollinators including the Rusty-patched bumblebee," says Patricia Landry, Toronto Parks Program Officer.

Olivastri said, "Friends of the Earth wanted to support Toronto's mission to help its horticulture staff and citizens move to a more sustainable approach to horticulture and we'd be keen to do the same with other communities across Canada." To obtain a free copy of "A Flower Patch for the Rusty-patched Bumblebee: Creating Habitat Gardens for Native Pollinators in the Greater Toronto Area", go to foecanada.org/bee-garden-guide


-30-
For more information or to arrange interviews, contact: Beatrice Olivastri, CEO, Friends of the Earth Canada tel 613 724-8690 or beatrice@foecanada.org

Friends of the Earth Canada (www.foecanada.org) is the Canadian member of Friends of the Earth International, the world's largest grassroots environmental network campaigning on today's most urgent environmental and social issues. For the past five years, Friends of the Earth has advocated for a ban on neonicotinoids and other systemic pesticides, gone to court to protect pollinators and delivered educational and motivational programs to protect bees. FOE's polling has established a benchmark showing the deep concern Canadians have for bees and the need for more education about wild, native bees.

Sheila Colla is an Assistant Professor in the Faculty of Environmental Studies at York University in Toronto. She has been researching native bee ecology and decline since 2004. She works closely with environmental non-governmental organizations (ENGOs) and government agencies to implement the best available science in policy and land management. She co-authored The Bumblebees of North America: An Identification Guide (Princeton University Press, 2014) and helps run the citizen science program BumbleBeeWatch.

Lorraine Johnson has been researching and writing about environmental issues for three decades, with her first book, Green Future: How to Make a World of Difference, published by Penguin Books in 1990. Much of her work focuses on creating habitat and enhancing biodiversity by growing native plants. Lorraine is the author or editor of 14 books and the past president of the North American Native Plant Society and a long-time community activist in the areas of urban agriculture, community gardening, backyard hens, and protecting, supporting and growing the urban forest.

Patricia Landry, is a Parks Program Officer at City of Toronto - Parks, Forestry & Recreation Division and has been extensively involved in consultations leading to Toronto's Pollinator Protection Strategy and in supporting the development of this new publication "A Flower Patch for the Rusty-patched Bumblebee: Creating Habitat Gardens for Native Pollinators in the Greater Toronto Area" which will be used as a guide by Toronto's horticulture staff.