Toronto, ON: The thousands of Canadians participating in 70 all-candidates debates in ridings across Canada reinforces that the environment - and specifically climate change - is a top election issue.

Videos of the debates are an important resource for voters still making up their minds before election day and, longer term, are a record of promises made. Voters can review their candidates’ commitments and decide who brought forward the best solutions on key environmental issues before they cast their votes. The video recordings are being compiled at 100debates.ca/debates. A brief recap video can be found here

In total, 69 debates have taken place, with the final one tonight in Northumberland-Peterborough South (registration here). The debates took place in 8 provinces - Alberta, British Columbia, Manitoba, New Brunswick, Newfoundland and Labrador, Nova Scotia, Ontario, and Québec. Each debate was organized by a local group from within the riding and coordinated by GreenPAC.

The data received to date indicate the 70 debates attracted in excess of 6,000 live viewers. Already the online videos have accumulated thousands of views. Of the 178 candidates that participated in the 54 reported debates, 42 were incumbent MPs, 48 were Liberal, 12 were Conservative, 47 were Green and 52 were NDP.

"By stepping up to organize 70 debates on the environment in the middle of a pandemic and the summer, Canadians have demonstrated exactly how much they care about this top issue," stated Sarah Van Exan, GreenPAC's Executive Director. She also observed, "Groups in many more ridings had hoped to organize debates, but the snap election timelines filled with tight candidate schedules, televised debates, religious holidays, lack of access to public meeting places and back-to-school dates were just too challenging." 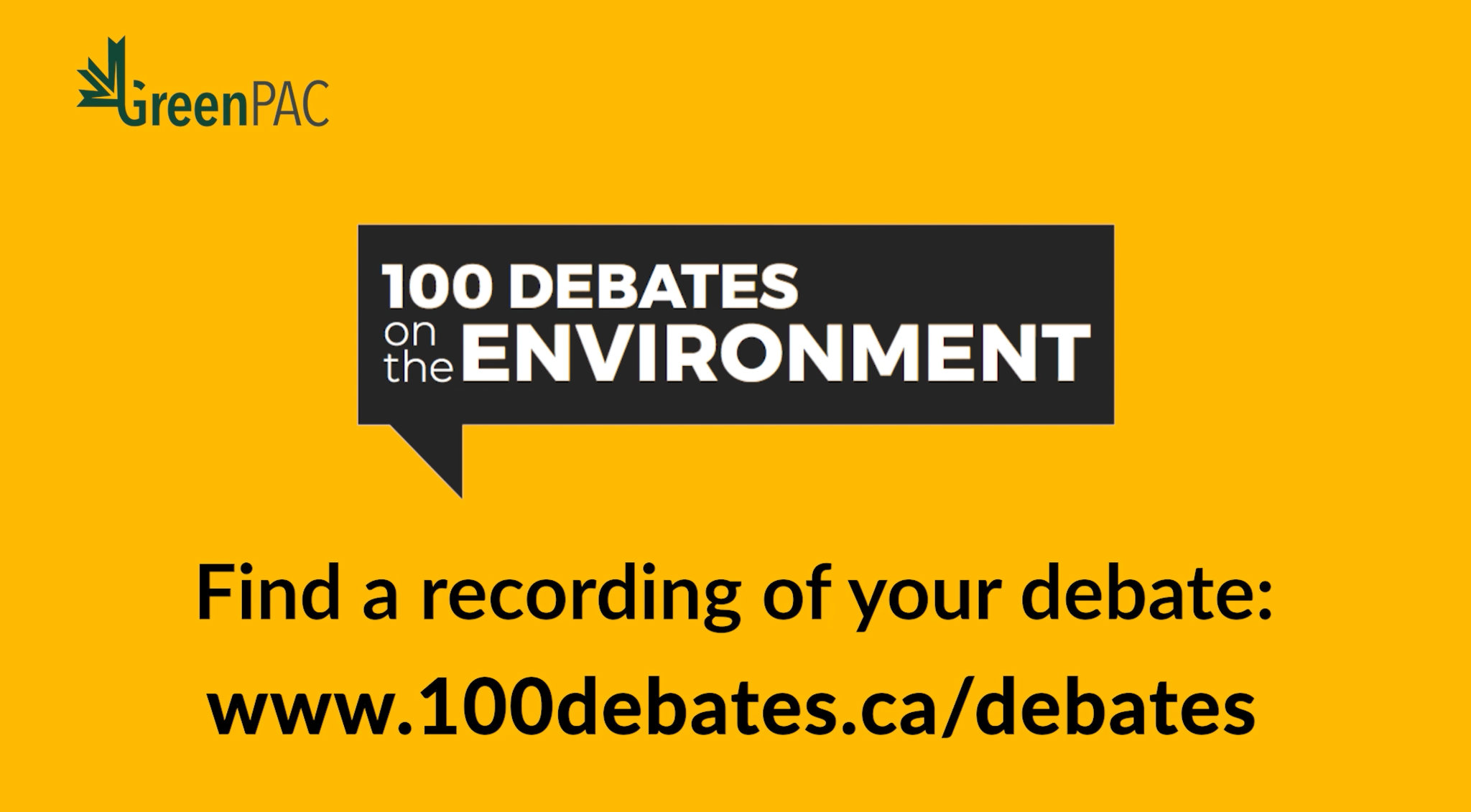 "While we did see a couple of innovative in-person debates, including one that took place as part of orientation at the University of New Brunswick, the vast majority have been online. " said Sarah Van Exan, GreenPAC's Executive Director. "Online debates have a different dynamic, but participants also said they resulted in more focused, detailed and cordial responses on how candidates plan to lead on the environment. The videos are up to help inform voters who missed the debates and they will remain online so constituents can hold those elected accountable for their commitments."

In the 2019 federal election, eighty-seven out of 411 candidates who participated in 104 Debates on the Environment were elected to the House of Commons.

Recordings of debates are being placed here (Link)

ABOUT 100 DEBATES ON THE ENVIRONMENT:
100 Debates on the Environment is a project coordinated by GreenPAC for the Sustainability Network. Visit www.100debates.ca/debates for more information on the project and for a list of local debates.


ABOUT GREENPAC:
GreenPAC was launched in 2015 and is Canada's non-partisan non-profit organization that works to build environmental leadership in politics. GreenPAC's other initiatives include a political internship program on Parliament Hill in Ottawa, as well as a non-partisan endorsement program for aspiring political candidates with a demonstrated commitment to the environment. 100 Debates on the Environment is coordinated by GreenPAC for the Sustainability Network, a national charitable organization. Visit www.greenpac.ca for more information.